The vast majority of adults in Britain – between two-thirds and five-sixths according to studies – admit to more than two hours daily in front of the box.

It is now well known that spending too much time sitting down is bad for the heart, even if one takes regular exercise.

Now American scientists have tried to quantify exactly how risky it is to spend too long on the sofa.

By looking at a number of separate studies and pooling the results, they estimated that if people limited their television viewing to a maximum of two hours a day, from birth, they would live on average 1.4 years longer than they do now.


Peter Katzmarzyk and I-Min Lee from the Pennington Biomedical Research Centre in Baton Rouge, Louisiana, also looked at the effect of total sitting time (including television watching) on life expectancy, in an article published in the journal BMJ Open.

They estimated that if people limited their sitting time to three hours a day, their life expectancy would increase by two years on average.

They looked at two studies in which people were asked how much time they spent sitting.

In the first, the Canadian Fitness Survey, participants were asked how much of their total waking hours they spent sitting. It found almost 50 per cent admitted to spending at least half their time sitting down.

In the second, an American study, volunteers were asked how much of their leisure time they spent doing so. It found similar results – that just over 50 per cent spent at least half their free time sitting down.

These results chime with a previous finding that the average American adult spends 7.7 hours a day sitting down.

Katzmarzyk and Lee concluded: “The results of this study indicate that extended sitting time and TV viewing may have the potential to reduce life expectancy in the USA.”

They said “a significant shift” in people’s behaviour, regarding cutting down on television watching and sitting down, was required “to make demonstrable improvements in life expectancy”.

David Spiegelhalter, Professor of the Public Understanding of Risk at Cambridge University, agreed.

He said: “It seems plausible that if future generations moved around a bit more, then they might live longer on average.

“But very few of us currently spend less than three hours sitting each day, and so this seems a very optimistic target.” 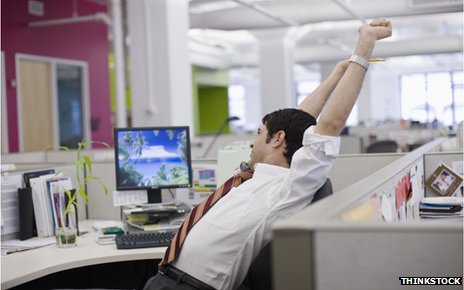 Office workers, bankers, IT experts and couch potatoes beware. Doctors are warning sitting down for too long can shorten lives. So how can the chair be countered?

Ever since the advent of the service industry, the nation has fallen in love with the swivel chair.

Study after study shows the UK is getting more sedentary in its working and home life.


Yet the dangers of sitting down for prolonged periods have also been well documented, with scientists saying there is a higher risk of obesity, Type 2 diabetes and heart disease. Now, in a report for the online journal BMJ Open, scientists say limiting the time we spend sitting to just three hours a day could add an extra two years to our life expectancy. Cutting daily TV viewing down to two hours could add on 1.4 years.
Sedentary studies
So how can those that live a sedentary lifestyle slip the shackle of the swivel chair and snatch some extra time standing up?

It’s not just sitting down. Adopting any one posture for a long time is bad, says Jane White from the Institution of Occupational Safety and Health (IOSH).

“Some of the Met police recently collapsed at a passing out ceremony from standing up for too long. It’s being static that’s the health issue – it slows down the circulatory system, blood, oxygen and vital nutrients,” she says.

White notes that 7.6m working days are lost a year as result of musculoskeletal disorders in the UK.

With desk-based office jobs on the rise, IOSH “encourages more movements, more breaks, and taking time to consider health and wellbeing”, she says. 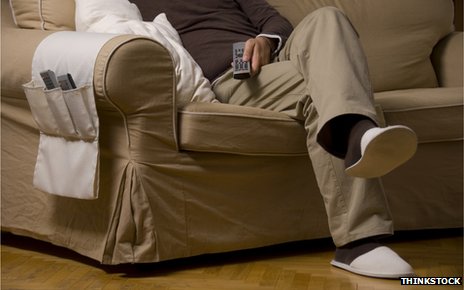 But White says other companies are more inventive.

“In one, people are encouraged to stand when they take a phone call – apparently it was sold on the idea it burnt more calories. Another company has a no internal email day, so people have to leave their desks to deliver messages within the organisation.

“We’ve been to another company with a boardroom with no table and chairs, so meetings don’t take so long. And we’ve had experience of offices having pedometers under desks – the British Heart Foundation has helped encourage that.”

Working off calories
Source: IOSH
Priya Dasoju, a professional adviser and chartered physiotherapist, suggests simple things like setting reminders on an Outlook calendar to move every 20 minutes, or using a printer further away. 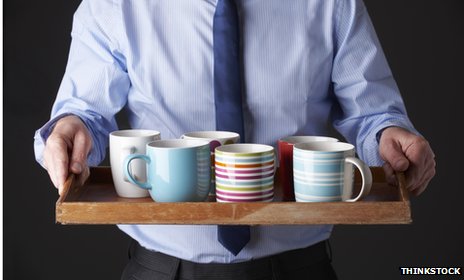 Other easy-to-implement actions are using stairs rather than lifts, offering to do the tea round and drinking more water and speaking to people in person. Even stretches at the desk help.

While getting off the train one stop earlier, parking a little further afield, or choosing to stand up rather than sit down on a commute is all time well spent, she says.

In an ideal world, the physiotherapist advocates tailor-made work stations, but they would cost money.

There should be a cultural shift, she says.

“It’s not like bosses say, ‘make sure you keep moving to look after your back’, it is not really thought about. It is becoming more acceptable to go to the gym at lunch, but it needs to get to the point that it is frowned upon when people have lunch at their desks.

“There need to be exercise schemes, it needs to be part of inductions, rather than an aside. It has happened to a degree with flights which have got exercises on screens to prevent DVT,” she says.

Dr Sarah Jarvis, a presenter on the BBC’s One Show, says simple things like not storing items at the bottom of staircases – but taking items upstairs whenever they need to be moved – can make a big difference. As can parking far from the supermarket entrance.

“It’s about setting targets – for example if an errand is less than half a mile away, walk.

“If people burn, say, an extra 100 calories over the course of a day by doing small things, that’s a pound of weight in just over a month, which is not far away from a stone a year. Thinking of it like that can have an impact,” she says.

White says she also has some personal tips on how to keep active in front of the screen in the – somewhat unhelpfully named – sitting room.

“Personally I enjoy Wii or Xbox with the kids – it can be dancing to Michael Jackson.

“I know my other half likes having a spinning bike in the shed – so he can escape the kids watching EastEnders. Ultimately, it’s all about encouraging exercise and bringing it into mundane tasks at home,” she says.

BBC News – A sitting person’s guide to standing up
eklectica - this, that & everything